Then see in Austria

Austria, being quite modest in area compared to its European neighbors, amazes with a huge number of interesting places – both natural and man-made. All types of tourism are developed in the country: cultural, educational, health-improving, recreational, sports, sightseeing, etc.

It is easy to imagine that it was here, surrounded by sparkling alpine peaks, blue mirror lakes and dense emerald forests, that the great composers of the past were inspired: Mozart, Schubert, Brahms.

During the high season, major cities in Austria experience an unprecedented influx of tourists. Travelers, following their own maximum program, move from city to city, trying to cover all the most interesting.

In Vienna, the Ringstrasse is popular – a street around the central district, where the main attractions are concentrated, in Salzburg – the Mirabell Palace and the Hohensalzburg Castle, in Graz – the Museum of Modern Art.

In addition, the summer months are a wonderful time to walk through idyllic alpine meadows and national parks. Every year, hundreds of thousands of tourists travel to the Alps: to conquer a mountain peak, look into an ice or karst cave, learn more about the unique flora and fauna of the region. 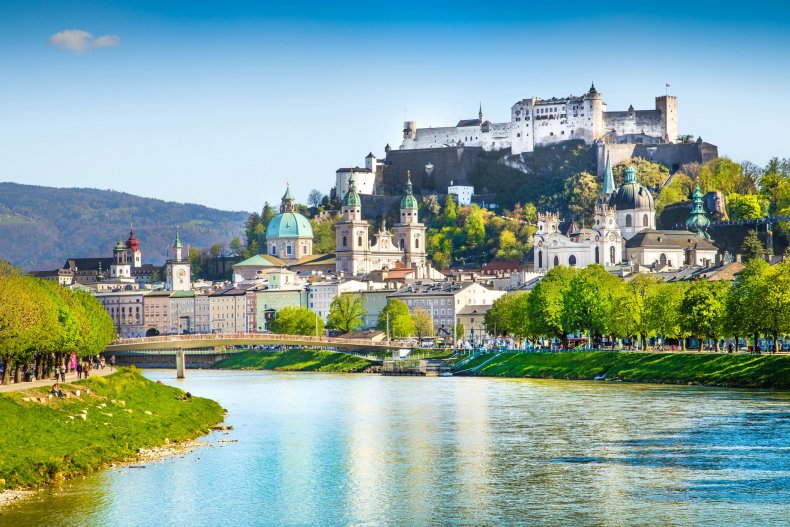 In winter, tourists storm the ski resorts of Austria. In the pre-Christmas season, people walk along the spacious squares and central streets of cities, admiring the festive illumination, sit down for a cup of coffee in local restaurants, and choose gifts for the holidays.

Vienna’s Belvedere Palace is one of the most impressive complexes in Vienna, in the Landstrasse district. “Vienna Versailles” – an example of the palace baroque of the XVIII century – has not changed much since its construction. The park, spread between the Upper and Lower Belvedere, deserves special attention.

The Austrian Gallery is located here, the collection of which presents works by Austrian artists of the 19th-20th centuries. and contemporary painters. The pearl of the collection are the works of Gustav Klimt.

The Schönbrunn Palace complex, the summer residence of the Habsburgs, is on the list of the most important architectural structures in the Austrian Baroque style. The palace and gardens are classified as a UNESCO World Heritage Site. Of the 1441 rooms, only 40 are open for tourists, but this is quite enough to gain impressions.

As part of a trip to Schönbrunn, you can attend a classical music concert, take part in a tasting or meet the inhabitants of the local zoo. One of the most memorable sights of the palace complex is the Neptune Fountain.

Another imperial residence is the Hofburg palace and park complex. Palaces and various buildings are made in different architectural styles, including Gothic, Renaissance, Baroque. Not all of them are open to tourists. For example, you can go to the Sissi Museum, the Treasury and the Imperial Chambers, take a walk in the park, look into the country’s largest Austrian National Library.

Considering the scale of the Hofburg, it is definitely worth allocating half a day to see it. You can visit the palace on your own with an audio guide in Russian or as part of an excursion group.

The Vienna Opera (Staatsoper) is one of those associations that are sure to arise in the memory of every tourist at the mention of Vienna.

The construction of the State Opera House on the Ringstars has a sad history. The work was entrusted to two architects – Eduard Van der Nyl, who was in charge of the decoration, and August Zickardsburg, who was responsible for the construction. The opera was built and opened on May 25, 1869 with Mozart’s production of Don Giovanni.

The premiere was attended by Emperor Franz Joseph himself, who inadvertently remarked to his retinue about a certain squatness of the new building. This was the reason for numerous attacks on the authors of the construction in the architectural environment. The result was disastrous: Van der Nyl committed suicide, and Zickardsburg died of a heart attack. Emperor Franz Joseph has since been very cautious in assessing artistic and architectural works.

During the Second World War, the building of the Vienna Opera was badly damaged: the auditorium and the stage were destroyed, the props and scenery for most productions were destroyed. It was only in 1953 that the restoration of the opera house began under the direction of the architect Erich Boltenstein. Boltenstein successfully added the preserved fragments of the pre-war Opera into the restored building – a staircase with marble railings, sculptures, a loggia and ceiling frescoes by Moritz von Schwind, depicting scenes from The Magic Flute.

The second birth of the Opera took place in 1955, and the first on the new stage was Beethoven’s opera Fidelio (Fidelio), Karl Boehm conducted the orchestra. There were so many people who wanted to attend the premiere that the hall could not accommodate them all. Speakers were set up in the street, and hundreds of Viennese listened to the production outside the walls of the opera.

Today, the Vienna State Opera House “Staatsoper” is available to any viewer. Therefore, tourists who have arrived in Vienna for several days and wish to attend one of the performances should take care of tickets in advance.